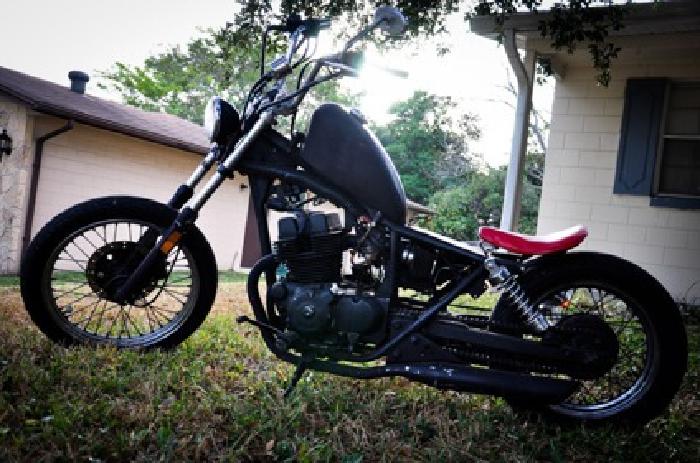 I have a '86 Rebel Bobbber that's in great condition. Runs just fine and is perfect for beginners who want a head-turner kind of bike. It's got a few scratches here and there on the paint job but nothing that can't just be repainted over. As you can see from the pictures, it's got a flat black tank and engine along with the pipes and a red leather seat. It's gotta new battery, the clutch has been worked on so it works perfectly, I installed the front break so now it has both, and it's been kept up to date with maintenance work like oil changes and chain lubed, etc. Both tires are in good condition and shouldn't be needing to be changed anytime soon. It'll top out at 80mph and works perfectly as a "get around town" kind of bike. I've only really used it to go to school less than 10 miles away and just to go for rides but nothing crazy like to Tampa or anything. One of the hand grips isn't attached, yet I do have it on the previous handlebar that I took off due to it being uncomfortable. If you take the bike then obviously you'll get the other handlebar along with the grip, it's just glue on pretty tight. Also I'll throw in some exhaust wrap for the pipes (just haven't had the time to put them on). The odometer finally started working again around 5k miles but in reality I'd say its mileage is around 20k. Its got a clean title which I have. Other than that, it's all ready to go. [removed phone]. call during the day and leave a message if I don't respond immediately. I WILL GET BACK WITH YOU.